Richard and his Billy 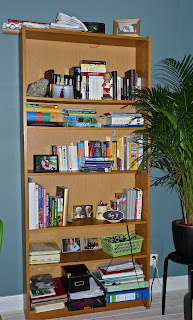 Richard lives in Bromma and moved to Sweden from the Nederlands a couple of years ago. In the bookcase there are a level of mainly Dutch books and two other levels of mainly Swedish books. Differently from me, he has read about 90% of his books.

Richard was not aware of his bookcase being a Billy until he had already bought it. He bought it because the bookcase fit into the apartment he was living in at that moment and he found it for a good price in a second hand shop located nearby, so he did not have to carry it for too long. He said "vem bryr sig" (who cares) when asking if he was satisfied with his decision of the bookcase.

On top of the bookcase there is a picture of Richard’s cat he was not able to bring with him to Sweden and different kinds of manuals for devices.
On the level underneath there are Swedish novels, a stone to keep the books up a picture and a the football player standing on the shelf is a prize from a tournament years ago.

On the next level there are books about Sweden. Maps, guides, dictionaries, “på spåret” which is a famous Swedish television series and Swedish history books.
Beneath that level there are mainly novels in Dutch and a Cyclopedia (which for me feels very Dutch) and contains everything that has to do with biking. 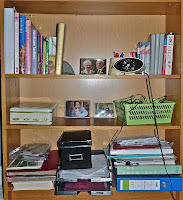 In the middle of the bookcase there are cooking books on the left and a stone keeps them from tipping. In the middle there is a picture of his parents and on the right there is a watch, some pens and language books and two guides to Italy.
Below that level there are pictures of relatives and a box were there is a white metal box and another box with electric gadgets, chargers etc.
On the lowest level he keeps all sorts of administrative papers that needs to be taken care of.
At the end of the interview he Richard did show some affection towards his bookcase, so he seem not to be too disappointed with his decision.