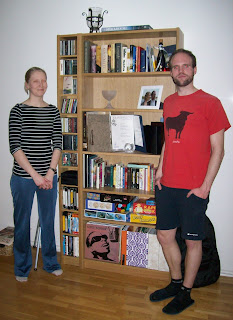 What I find very interesting about the Billy bookcase from David and Kristin almost didn’t come up during the interview. When I asked if they had any difficulties putting it together they first answered: “Not really”. Kristin then looked at David chuckling and adding: “Well, we had a problem when we moved and were putting it together for the second time. Should I tell?” – “Well it is kind of embarrassing for me,” said David.

The story begins with assembling the Billy in their new apartment in Nacka where they currently live together. Billy was moved as a frame but they detached the middle (fixed) shelf, the back side and all of the other shelves. David put it together and it was only when they’ve lifted it to vertical position, that it became obvious that the fixed shelf was nailed the wrong way. “We knew that immediately as the side was different; it was not even wood it was some sort of sawdust.” The back side was already nailed to the frame, so they’ve decided that they couldn’t remove the shelf anymore, as they would damage it too much. “It was bothering us, but I knew that maybe we could buy a veneer tape. I saw that before as me and my father used to build furniture when I was younger.” They looked all over Stockholm and couldn’t find it. But they were determined to cover up the mistake as difference with other shelves was too obvious and unsettling. They finally found the tape in the small town called Skane (in Västra Götaland), several 100 kilometers from Stockholm. If they wouldn’t tell me this story I would have never saw the difference, neither could I see it once I knew it was taped.

I believe this story speaks of Billy’s design, imperfect in many ways due to production costs and also about designing techniques that try to mimic a better quality material. A mistake in assembling Billy showed the “true nature” of the material to them and the visual appearance was too disturbing for them to keep it exposed.

David and Kristin are both very aware of the Billy as a cheap furniture and explained to me what we already knew – “Billy sounds like billig in Swedish, meaning cheap so you know it is a cheap bookcase when you go and buy it.” They were choosing between white and oak and decided to go for oak to achieve better balance in the apartment, as a lot of things were already white. They also talk about balance when we talk about its position in the room –“Sofa and a large shelf are on an opposite wall so it felt right, to keep it in balance.” Once put in the place it stayed there (this also goes for their previous apartment). They moved Benno to its right side in the new apartment, while it was previously on the left side.

Billy is treated as an IKEA icon. “Billy is the most famous furniture from IKEA. When we went to Kugens Kurva we knew it was going to be Billy. The price was only 299 kronor.” They have no complaints about Billy. “It serves it purpose and it is a good design. But you know it is cheap because of the way shelves are put in...There is a few millimeter gap. Better bookcases don’t have that difference; the shelf and the frame are in the same line.” The only things they would never put on Billy are shoes and food, but otherwise they don’t see it as a book case in a strict sense.

What I can tell from one visit, David and Kristin (currently engaged) is a very harmonious couple. This is manifested in things they have on the Billy. No territory battles, no-one dominates with his/her stuff. Items are mixed. There is no “his” or “her” shelf, no boundaries. Books and CDs of course officially belong to one or another, but they don’t keep track of that anymore and a lot of new things are common property.

David moved from Madrid to Stockholm to study engineering at KTH. He met Kristin at the Lappis campus where they’ve shared a corridor and after they have both finished their studies (Kristin studied Human Resources), they moved together first to an apartment in Östermalm and then to Nacka, where I visited them. They are both working now. 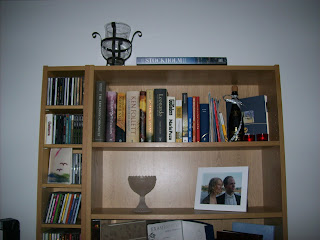 On the top shelf they have books (mostly novels but also The Ericsson chronicle – showing that David works for Ericsson), maps of Stockholm, an empty bottle (that Kristin received for her birthday some years ago), a book about hiking paths (that they’ve received at the wedding they’ve attended). They almost never take or move something from the top shelf. Only guide book about Stockholm and a book about walks are sometimes looked at. Second shelf from the top reveals a framed photo of them taken at David’s university graduation in front of city hall. Next to it does a bowl that resembles a vase. They have used it for candies in the previous apartment, now it serves as a decoration. 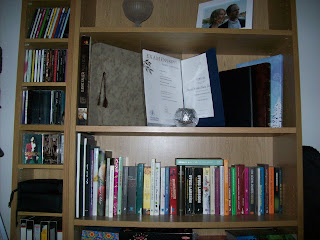 Third shelf contains photo albums of their trips as a couple and albums of weddings they visited. In the middle there are both of their diplomas displayed opened - so that you can see the insides. They don’t look at the photo albums often; they only took them of shelf when they have some visitors. This is the most valued shelf (or as we call it the golden shelf), as when we hypothetically talk about a disaster in which they would could have time to grab something valuable to save it and run out of the apartment, they would both grab the photo albums and diplomas (Kristin maybe also a glass bowl). Fourth shelf is a book shelf in its full meaning. Interestingly the books used to be color coded in the previous apartment and now they are alphabetized, accept for the both ends. On one end there are taller books and on the other end side - books that are next in line to be read. The barrier from the other books (accept with taller) it’s not clear to an outside observer. 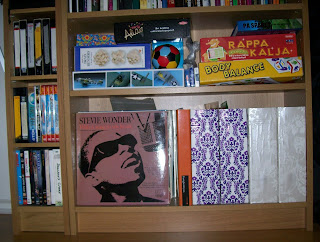 On the fifth shelf (second from bottom up) there are games – mostly board games. They don’t play them often; accept for the latest one they’ve bought – a form of a quiz in Swedish. The bottom shelf is a shelf for storage. It begins with LP records that hide a portable record player that was a gift from Kristin’s parents. They’ve accumulated some records since then, but most of them they have gotten with the player. The player is not hidden intentionally but resides there because of his dimensions and convenience. Next to the records are folders with manuals, magazines and school papers. As all of the other shelves this one is also not used often. On top of Billy there is what is described as a “very nice book with aerial photos of Stockholm” and a new special edition of the Bible. It looks like a magazine, as it is a contemporary version. As we speak about it they decide they should put it to the Expedit Ikea furniture in order to display it. Also on top there is a lamp that is going to be put outside on the balcony once they buy a candle. They just got it a few weeks ago, so I can assume that top of the Billy serves as a temporary landing spot.

Half way through the interview they’ve thought the CD shelf that is next to the bookcase was Billy also, but then Kristin remembered that it is a Benno. Benno is full of CD’s and even VHS cassettes that they´ve pick out of the garbage when somebody was moving (together with a VHs player). There are also some DVDs of Pippi Långstrump series but the most precious for Kristin is Dawson’s creek series that she bought impulsively when she saw it as a reminder of what used to be her favorite show when she was a teenager. “It’s more of a thing to have, I haven’t really watched all of the series again, only a few.” A very valuable DVD for David contains his appearance on TV, when he was interviewed as an exchange student.

As already mentioned, they seem to be a loving couple and their bond is perhaps evident as a blend of object, where they don’t have clear boundaries what is from whom.

Most of the books are not older than three years. They keep the older books in the basement and other - Expedit bookshelf (which holds magazines, study literature and most of all decorative objects). They are not sure what will happen when they are going to read all of them and buy new ones. “It is a good question, I don’t know, it has never happened before. I guess maybe we will rearrange them.”

The books mostly speak about their reading preferences. Their hobbies are sports (triathlon for David and badminton for Kristin), dancing (Lindi Hop as a couple), Kristin sings in a choir and David likes to cook, but there are no books on any other objects on the shelf signifying that. Together with other IKEA objects, Billy also speaks of their attitude to IKEA. They are mostly satisfied with IKEA designs. As we look around this fact is quite obvious as almost everything (accept the sofa- as “sofas at IKEA are not good”) is from IKEA (Tv stand, Expedit, two coffee tables, working table and kitchen table and chairs, shelves and so on). “We plan to stop buying IKEA”, David adds when they name the items.

To end this post I would like to stress how difficult it was for me to find someone I don’t know with a Billy bookcase. As I am an exchange student all of my friends are also exchange students (with a couple of exceptions). People they know and I don’t, are also mostly exchange students all living in campuses where furniture is not from IKEA. I asked more than fifty people to ask around, I searched on Facebook, I even posted on some Swedish forums -all to no avail. It was Friday when I finally got a friend of a friend with a Billy but he was living 140 km out of Stockholm! Then Annika suggested David and I want to thank her again.
Posted by Barbara at 3:58 PM