#2 interview- "The curve of smile" 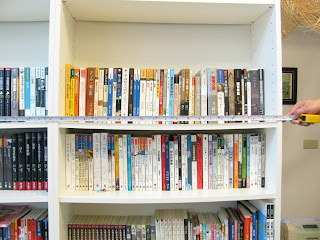 I found my second interviewee on their blog through the internet while I was searching for the picture of Billy bookshelf. Their story immediately caught my eye, after contacted with her and got some more information about their bookshelf, I decided to write about their tricky negotiation with Ikea as my assignment.
p.s. All the pictures and videos are cited from their blog.

About Garphie Liu and M.Kuo
Garphie Liu is a successful and active writer who published more than 10 books talking about the issues between male and female. M.kuo, her husband, is a screenwriter. The ages of this Couple are around 30-40 and they live in the north of Taiwan where the whole long story happened.


About the story
It started from last July and still keeps going until now, I organized it with time to make it easier to read, but I have to say it is more complicated than I wrote here, if I wrote everything happened down here than it would take about 5 pages.
Late July 2010
They bought two full size Billys ( 80cm*202cm ) in 21/7 last year, and after putting books around 18KG into each shelf for one month, the shelves of their Billy deformed in an extreme way without reaching the weight limitation set up by Ikea --- 30KG for each shelf.
In their blog, they named the deform ” the curve of smile”. 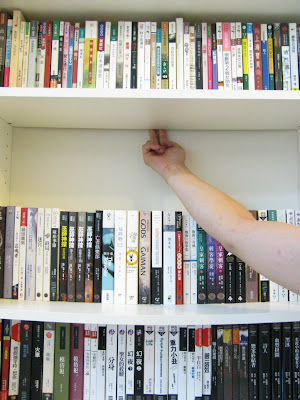 Mid Oct.  2010
First they contacted with Ikea in October, and got the reply like “we can give you a new one but we can’t promise whether it would deform or not because they are the same products, and if you want to change to the 40cm*202cm (slim Billy) which may not deform that much- we still can’t promise for that- you should pay the difference in price. ”
Unlike other consumers, they didn’t end up changing the bookcase provided from Ikea. Since Billy can only afford half of the weight it should do due to the higher humidity circumstance in Taiwan as they said, they strongly asked Ikea to change the signs in store from 30KG to 15 KG.
After 20 days, Ikea told them they could get the slim one without paying the difference, but somehow Ikea ignored their request and still kept the signs-30kg- in stores and on their website. The negotiations reached a deadlock.
﻿﻿﻿﻿
﻿﻿﻿﻿

Dec. 2010
They phoned Ikea again after one month, but Ikea told them the man dealing with their case quitted! No one knew what happened and everything had to start over again.
With full of anger, they turned to Consumer Protection Commission for help, and soon they got the reply both from Ikea and the Commission which really pissed them off. Ikea just told Commission the story in a very simply and shortly way which for them did not reflect the truth at all, in that report Ikea almost threw all the responsibility to the couple, and still kept the limit 30kg on the website, they just fixed the weight problem by adding a p.s.--“the weight limit varies according to the condition of your house, please keep your place dry and ventilated ”
﻿﻿﻿
﻿
Jan. 2011
This couple applied for another council again to get the chance meeting with Ikea face to face, and finally they reached a conclusion that M.kuo could accept- not satisfy but accept- in the second council. Ikea should rewrite the report, deliver and assemble slim Bilys free for them as a compensation. What still made M.kuo mad was that Ikea doesn’t want to and haven’t done anything more than the PS. about the weight limit, so until now they are still fighting for this “30kg-sign” thing, they insisted that Ikea should not put the misleading 30Kg sign to fool consumers, but make the sign more clear and truthful.
﻿
﻿

Feb. 2011
They went for the press and everything was on the news, in the video you can see Ikea admit that Billy can only stand 15KG on each shelf, but somehow they still keep the 30kg sign on the website. 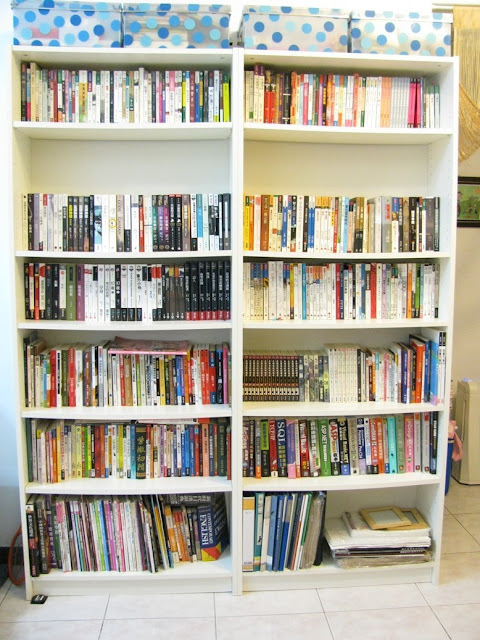 1.When and why did you buy the bookshelf? Where did you place the books before you bought the shelves?
We bought Billy because the old bookcase we had is too small.
2.Why Billy?  Why white?
Because the original bookcase we had before is color in wood which looks huge, and for us, it created a sense of stress due to the volume.
So we bought the Billy in white in order to reduce the volume, and we hope it will fit into background in our house since our wall is white.
3.Are you still using those bookshelves after the whole mess including the terrible negotiations with IKEA and the extremely deform shelves?
What are you going to deal with those bookcases if you don’t want it anymore?
We are still using the deform one after Ikea gave us new slim Billy, but we are not quite satisfied with the new one because the depth is not as deep as full size Billy. Now we can’t put books we are reading in the front of shelf.
4. Would you buy similar bookshelf in the future?
Never ever again
The experience was terrible.
the content of bookcase
1. Since you are an writer, do you have any book written by you in bookshelf?
Yes, in the right billy, first floor.
2. The upper shelf is much smaller than other shelves and the second one is much bigger than others, did you assumable that on purpose or it just happens like that?
We thought we can assemble an extra shelf between the first and second shelf in the beginning, but the space is not enough for another shelf because the size of our books are a little bit higher than the space left there. What a shame….Just a little bit higher! If we can drill holes on the side of Billy by our shelves, than we would have one more floor. 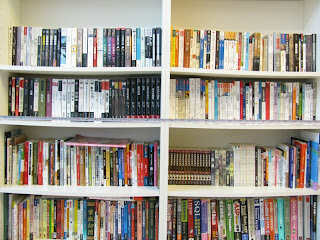 3. How do you range your books?
We have one shelf of novels, one shelf of Reasoning novel, one shelf of computer books, etc…
4. Where are the bookshelves now?
In the living room
We have other one in bedroom as well.
5. Do you place your books separately or mix them together with books from your husband? Who owns more space than the other one?
My books are his books, and his books are mine. We never try to separate our books.