I am really a "Billy Person" For the second interview, I added out an appeal at Facebook and put up a notice in the student house where I live. I got some tips but they all lived outside Stockholm. One from my highschool got in touch- we have not met in six years. I had the opportunity to meet his mother 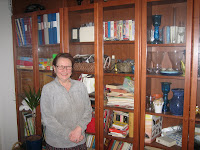 I met Anna-Lisa Saturday afternoon. Anna-Lisa is 59 years old and live in apartment south of Stockholm. She works as a socialworker and lives with her two cats. Anna-Lisa is orginally from Finland with an american mother. There are also two adults sons in the family, who have moved out. I ask Anna-Lisa to tell her story about Billy bookcase. She tell me that she bought her first Billy bookcase to her townhouse where she lived before. When she should move to a smaller apartment she was thinking if every Billy bookcases would fit and it turned out that it was almost everyone. One bookcase may stand alone now because the room in the aparment is not so great. This Billy bookcase is eight years old!
I also ask if she has any thoughts of Billy's shape, color and design - Anna-Lisa thinks Billy is easy to have, it is convenient and you can combine it. She also tells me that she will buy one for the kitchen, and she want this one to be half open and half covered with doors. Why IKEA and Billy? It is both cheap and stylish, Billy has always been in IKEA and you can always buy one more and combine.
Inspired by one of the articles and our visit to IKEA I asked if she thought that IKEA is a green eco-friendly company. Anna-Lisa did not think so as they make furniture and fabrics in other countries where they can not be so certain if it is enviromentally friendly, but hopefully the can be it in the future. Anna-Lisa says that she knew she want to have a Billy and that she went to IKEA to buy Billy, she had been there serval times before. I ask if she looked in any other stores too, but she had not. She simply wanted to have a Billy! Earlier in the townhouse she had Billy in the bedroom also, which she sold on blocket.se and it is a good resale value on Billy. Anna-Lisa says that she in the apartment before the townhouse also had Billy. I am a real "Billy person" because the measure suits, the design suits and the prize fit! I tell her that someone earlier said "billig Billy", but to this Anna-Lisa absolutely disagree and say that Billy is quality bookshelf! Anna-Lisa got help from her youngest son to build Billy bookcase, when he was 16 year old. When they came home with the bookcase, it was the wrong color in the package, but IKEA fixed everything and came up with a new Billy in a few days.
Since 1975, Anna-Lisa had a succession of Billy Bookcases and she bought them at diffrent times and combined with various accessories. But now she can not buy more because there is no more place in the apartment, otherwise it could become more. Except for the kitchen! Anna-Lisa lists serveal books that she likes best, includning a number of english detective novels, cookbooks and several books in Finnish. She save these books so that she could read them again and again. Anna-Lisa borrows a lot of books at the libary and also buy some good books at second-hand market. The only new books are cookbooks the she gets for Christmas and birthday presents! Anna-Lisa also read newspapers and magazines, she subscribed three finnish magazines that she really likes. Anna-Lisa says that she speaks and reads books in Swedish, Finnish, Norwegian and English! Anna-Lisa told me cheerfully, with a laugh that she has tens of thousands of pictures of their children and from her own childhood. The cards are in the album, but not in Billy, but in an other piece of furniture from IKEA. 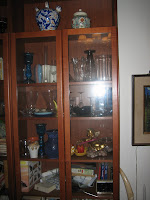 Anna-Lisa thinks her Billy Bookcase is stylish, with the doors and that it is also pracitcal. Marie bowls, porcelain and glass that Anna-Lisa has inherited and is careful with she put in the bookcase. I ask her aboat the porcelain on the top shelf and she then tells me that the one to the left is bought in Spain by her parents and the other one is from Turkey. The books are important, during your lifetime they follow you and the book develop you and become your best friends! If you have a book you learn a lot about life and Anna-Lisa can never go to sleep without reading a book. Similary, the cards are important, Anna-Lisa has cards from her father who was in the Finnish Winter War and he has documented everything. Anna-Lisa has inherited many cards from her father, which is important to preserve. She also says that her mother was born in New York and she has cards from there as well. A few years ago, Anna-Lisa and her two sons went to grandmother's old neighborhood.
Billy's main task is to be a bookcase, it takes up little space and is easy to build in a the wide variety of needs, it comes in many diffrent woods and diffrent series which is good, even if you do not want to replace the wood you have.

Inspired by Gaston Bachelard I also ask if Billy would be one of the four elements air, fire, water, earth - which would she say? Anna-Lisa thought for a moment and then says firmly that Billy is earth because it is so down to the ground. Can we say that Billy Bookcase is linked to your personality and that you have a good relationships to Billy? Anna-Lisa says that it is linked to her as a person and in this way she is happy and that is a part of her swedish life!

I also ask question if Billy fits in every room. She thinks that Billy is suitable in all rooms, and that she is also want to have one in the kitchen later. Then she continues to talk about that you can not see that Billy is an IKEA furniture. When her friends from Finland visit her, and she says that the bookcase is an IKEA furniture, they become excited and say "this should I buy as well"! Everybody thinks it looks so nice with the doors she continues. If she moves, she would take Billy with her.

I ask her a question if I have missed to ask something she thinks is important. Yes, she said! You have not said anything aboat missing parts and missing screws!