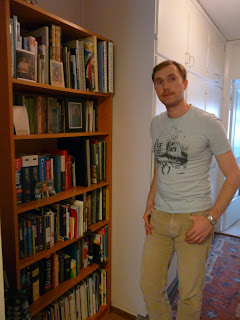 I want to start with a brief story how I found my second interviewee. When I knew that we need to find participants for our project- I e-mailed the whole school in an effort to find a volunteer. Konstfack approximately has more than a thousand of students. I got only one reply…

His name is Pavel Fiorentino ( and he is a first-year master student at Art in the Public Realm (Fine Arts department). And fortunately he turned to be my fellow citizen. He is living in Sollentuna , nice picturesque area almost out of Stockholm. Pavel sharing his apartment with his partner Ever, who is also a student in IT sciences. Pavel is incredibly interesting person with a great experience of traveling, working and studying (all listed above most of the time is blended in one). Our dialogue was in Russian.

Pavels’ “Billy” found its place in the corridor and its full of books from the top to the bottom. But lets’ start from the very beginning.
When and how you got your “Billy”?- We got it from our friend Daniel. He is always moving from place to place. May be once a year. So during one of these removals he gave us this ‘Billy’. Before we got another IKEA bookcase, a little bit smaller, but it was quiet shaky, so we decided to take this “Billy” from him. He transported it with a truck.
How do you feel about IKEA furniture? About its aesthetic? – Well, you know, I can see it as cheap, very clear furniture. And when IKEA was just opened in Russia it was so new, unusual and fresh comparing with Soviet Union furniture (you remember how it looked like) . But of cause comparing with the other European furniture market, Ikea is just the lowest minimum. To my mind it is very inexpressive pieces of furniture and actually not so practical as they seem to be. They are breaking all the time (probably every 5 years and you have to change it). It is in a way marketing trick.
I saw so many books there in your shelves…-Yes books and small display of Evers’ photos and some memorable postcard- presents from my friends.
And then we had a close look on the stuff at the shelves.
It is amazing how books represents at least some part of the owners’ character, his past and present. Pavel now is making photography. He was studying in Brighton (UK), but before he worked for a l 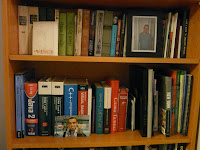 ong period as a journalist and in PR field. He finished Moscow State University as HND Journalist in International Affairs, and then work for such magazines as GQ, Men Fitness, Russian Media House ( UK, London). And of course was publishing in numerous magazines apart.
But back to ‘Billy’ shelves. Pavel told me that in organizing his shelves he was following the book size principle- the biggest were on the top shelf, where it was enough space. But you can see also a system ‘by theme’ in order. For example on the second shelf from the top Pavel has classic Russian literature (L. Tolstoy ‘War and Peace’, I. Bunin, A. Chehov) and some foreigner classic writers ( for ex. J.D.Salinger) (in Russian).
Third shelf belongs to Evers’ studying books and language- learning books (Swedish, Portuguese ), few travel books. 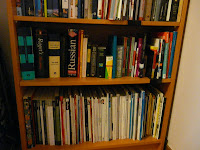 Next shelf is full of guide books. My eyes saw the big letters ‘USSR’
- What’s that? – Oh, it is a really nice story. Once we went to Moscow together with Ever and we were sitting in a café. There was an old lady and she was offering to buy old books from her. And we could definitely understand that she is doing it because she is in need for money. She was asking for this USSR guide book something around 50 rubles. Ever gave her much more and we bought it. Really sad story.
Dictionaries found their place on the fifth shelf. Russian-English, Russian- Portuguese, Swedish and much more. Also a few book of studying Russia. Ever studied Russian language for three weeks in Moscow.
-It seems to me that you have been traveling a lot!- Actually yes, I even worked in Portugal for a period of time. 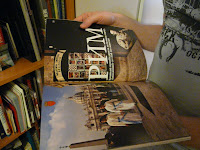 And on the bottom shelf is a Pavels’ reference library. Magazines and journals he was published in as well as those in which he found some remarkable articles, useful for his writing practice. I asked him to show some of his articles and he took out of the line the ‘National Geographic’ magazine, where he published an guide-article around Rome.(He was interviewing people living in Italy about special interesting places they found attractive).
There were few books which have special value for Pavel. F 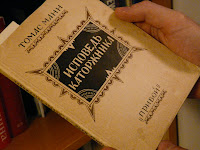 or example a book which he got from his father. It was written in the middle of 18th century and is a kind of medical book (both of Pavels’ parents are working in a medicine field). It is really interesting to have a look at this book, for the reason that of cause the understanding of diseases and their treatment at those times was totally different that nowadays. And also this book has this old pre-revolution style of writing and typing. Some words still have ‘Ъ’ letter in the end, which is not put there any longer. Also a book call «Исповедь каторжника» (“C 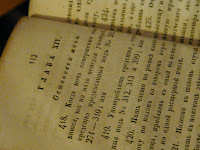 onfessions of a convict”), which was published in 1927.
And a series of Sothbey’s catalogues ( Pavel had been working as an administrator for Sothbey’s auction).
At the end I would love to quote Pavel ‘This bookcase is just a frame for my intellectual depository’
Posted by Dar.Makar at 8:08 PM