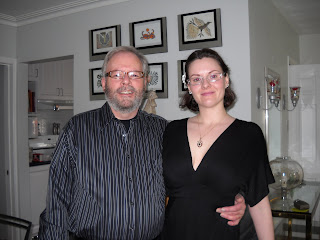 This week our interviewee is Alexander, a 63 year old retired government worker from my home town of Toronto! 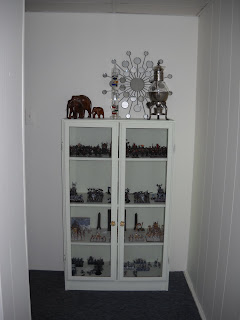 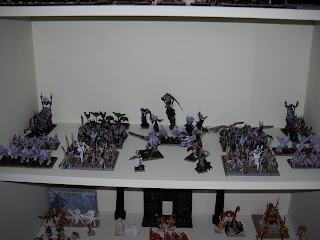 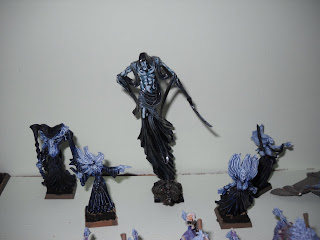 On the second shelf is a Vampire Counts army.
“I am very pleased with this army. I completed it in one year. Quite an improvement on my earlier attempt, eh?” (laughter).
Alexander has gone for a ghostly paint scheme, perfect for the legions of undead.
“I wanted an army that was cheap to build but still potentially powerful on the battlefield. I decided to build and ethereal/summoning army. What that basically means is that every unit in my army can be ‘brought back to life’ through magic and that the flashy units cannot be hit by mundane (non-magical) weapons and attacks. This makes my army have staying power beyond what you would expect from measly skeletons and brain munching zombies.”
I am particularly drawn to the purplish bruised flesh he used on the Zombies, Crypt Ghouls and Dire Wolves.
“I actually used an ‘Eavy Metal painting guide for those. I think those painting guides are like the recipes old ladies give you when you ask for “The cookies recipe”. You never get the same result no matter how closely you follow the instructions. When I originally started that paint scheme, I was working on my ghouls. They painted up very quickly; all twenty in just two days! A painters dream! However, it took some time for me to decide if I liked them or not. I was so disappointed that, at no stage in the painting process, did my models look like the ‘Eavy Metal ones.”
‘Eavy Metal is the exclusive painting group for Citadel, the company that makes Warhammer. These painters are considered to be first class and, though their work can be very impressive (I am blown away by the small freehand details like tattoos and embroidery) I do not like the way they paint shadows.
“You can paint your models however you want. One of the most common questions I get is ‘do you have to paint them certain colours or did you pick that combination yourself?’”
The ability to create your army in your own vision is part of the appeal.
Alexander’s Vampire Counts are every bit as impressive as his Warriors of Chaos. His only lord is Mannfred von Carstein, a powerful spell caster on a massive steed. For heroes he has Konrad von Carstein and a Vampire. His vampire is the old 6th edition Lamian Vampire model.
“In 6th edition there were four ‘bloodlines’ you could choose from. When they brought out 7th edition all that had changed. I could no longer use the Lamians special rules or abilities, but since I already had the models I was sure as heck going to use them anyway.”
Warhammer is a monopoly. Only models and materials made by Citadel are legal in terms of tournament play.
“I had thought of buying a unit of blood knights for my vampires but they cost $110 CAN for five! Highway robbery I tell you!”
For core unit choices Alexander has 40 Zombies, two units of 20 Skeleton Warriors equipped with light armour, spears and shields (giving them a 5+ armour save and allowing them to fight in 2 ranks) and full command, 20 Crypt Ghouls, two units of five Dire Wolves, three bases in his Bat Swarm and two Corpse Carts equipped with Unholy Loadstones.
“I built the core of my army from two battalion boxes. It is a lot of models at one time but it does save you some money. Anyone who has played this game [or any of the other games offered by Citadel] will tell you that buying in bulk is a bad thing. There is nothing more demoralizing than having swarms of unpainted models sitting around. For every one you paint there are dozens more waiting. Most people who give up on the game seem to be pushed over the edge by all the little grey, unblinking eyes staring at them as they wait to be painted.”
Of course, you can play with unpainted models but the true glory of Warhammer is a fully painted force arrayed for battle.
“More than anything else, you want them all painted up and on the table. It looks so good and makes you feel that all the time and effort was not wasted.”
Alexander’s special unit choices are few for this army. He has four Fell Bats and three bases of Spirit Hosts. I should pause here to explain what I mean when I say “base”. Each model is on a base, a slab of plastic that makes the units form up neatly. However, some models, such as swarms, will have more than one model on a base. These multi-model bases are formed up together to make units like any other model in the game.
For rare choices Alexander has a Varghulf, a giant bat-monster thing and a unit of Cairn Wraiths. He has 2600 points of Vampire Counts. 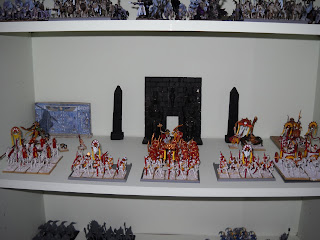 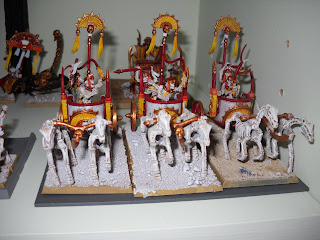 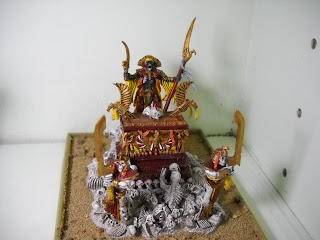 On the third shelf is a Tomb Kings army.
“Undead are a real challenge to play. You troops are slow, weak, they cannot hit the broad side of a barn and they die in droves. The up side is that they are cheap to field and you can summon them back to life.”
The map of the Warhammer world looks suspiciously like the world we actually live in and several of the armies are obviously based on real world peoples. The Tomb Kings are based on Egypt.
“In 5th edition you actually could have mummies in your army but they dropped that in 6th and there was no 7th edition army book [for the Tomb Kings].”
Alexander’s Tomb Kings army is lead by High Queen Khalida.
“She lets you build a special army with a lot of poisoned attacks. This actually makes you worthless skeletons a little more useful. Poisoned attacks automatically wound on a [roll of] 6 and if you are rolling a lot of dice a fair number of 6’s should pop up. In addition, undead to not get any penalties from moving and shooting so your shambling hoard can advance and shoot unhindered. Living armies are not so lucky.”
In addition to this special character model he has a High Liche Priest with the Casket of Souls upgrade. Think of the arc in “Indiana Jones: Raiders of the Lost Arc” and you will have a good idea of what this model does on the table top. For Heroes he has a Tomb Prince, two Icon Bearers and a Liche Priest. His army will have a very active magic phase.
His core units consist of 32 Skeleton Warriors, broken down into three units of 10 with two left over equipped with bows and full command groups. He has eight Heavy Skeletal Horsemen equipped with light armour, spears and shields (giving them a 4+ armour save and +1 strength on the charge) and a unit of three Light Chariots.
“Tomb Kings are the only army in the system that can take units of chariots. They are only Light chariots, meaning they get D3 impact hits instead of the standard D6, but that is still a lot of potential hurt when they charge into battle.”
Special choices for this army include the powerful Tomb Guard in a strong block of 20 warriors, 4 Ushabti and a Tomb Scorpion.
“This army was finished but now, under the new rules, it is no longer legal. I need more core units. I do not think I will add to all my armies to make them fit the new rules. I am, after all, trying to get off this consumer treadmill. That being said, I will take this hit if it is small enough. I only need 179 more points of core to be legal. And, this May, they are releasing new models for the tomb kings for the first time in something like ten years! There might be something good.”
Alexander currently has just under 2500 points of Tomb Kings and, under the new rules, to use everything he already has he will have to increase that total to at least 3500 points. He does not seem to be too upset, however, with the knowledge that new models are soon going to be released. 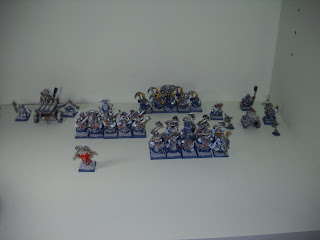 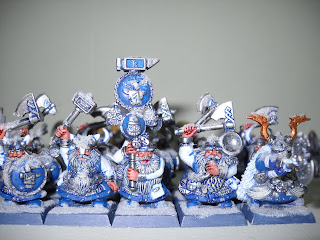 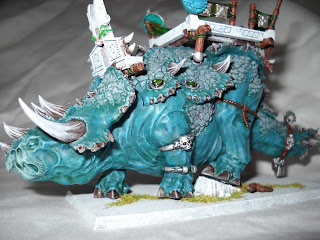 On the bottom shelf are two small armies; Lizardmen and Dwarves.
“I never really wanted Dwarves; I actually inherited them from a friend of mine who quit the hobby. There is only about 750 points there but with magic items you can stretch that to 1000 [points].”
This small Dwarven detachment consists of a Dwarf Lord, a Dragon Slayer, 12 Dwarf Warriors equipped with heavy armour, hand weapons and shields (4+ armour save and a 6+ ward save) and a full command, ten Thunderers with full command, eight Miners equipped with heavy armour and great weapons (5+ armour save and +2 strength in the first round of combat, however they always strike last) and a full command. He also has a Dwarf Cannon and an Organ Gun to round out his force.
“Everything other than the organ gun came from the Battle for Skull Pass boxed set (that was the introductory set released when 7th edition was launched) so all the models are limited edition. It makes them kind of cool but I still do not care much for them.”
The Lizardmen are a newer acquisition and, as such, are largely unpainted. In fact, Alexander would not let me photo graph the unpainted models.
“They are not very interesting when they are unpainted.”
The only model he has started is his Stegadon.
“What I really want are three of these” He beams, “but they are very expensive. Unfortunately I had a small mishap when putting it together and I have had to hack off a few bits that were glued incorrectly. No matter what I tried I could not get them apart without destroying something.”
As such, Alexander’s howdah is missing some parts.
“It is not such a big deal. Now if I have three, this one at least will stand out. I will just say it was intentional to make my kit unique.”
Since I cannot show you most of the models in this army, I will not list them all here. The army is currently worth about 1600 points but to get everything he wants Alexander will have to increase that total to something closer to 3000 points.
“It never stops. To an outsider it seems like madness but you will never understand until you are bitten by the hobby bug yourself. You just love it so much, all the possibilities and variations, that you will find it very difficult to get out of the hobby once you start.”
I would like to take this oppertunity to apologise to Alexander. Taking photographs of models is not easy without the right tools and, despite having natural light, every light in the room on, a torch and the camera flash, the pictures do not do his models justice. What is worse, none of the pictures of his Warriors of Chaos army turned out!