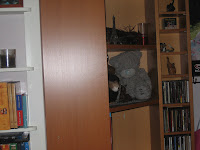 Before I did the interview I read Cook & Crangs tips! I did not have to shape my own field as I know I should interview and invent a friend's Billy Bookcase. Not at all easy, it turned out. None of my friends in Stockholm had a Billy Bookcase. I then rang a friend's parent, who accepted!
Before the interview I made a guide, which would be supportive to me and I was inspired by my own bookcase inventory, our discussions and what I've seen in our blog from our own personal bookcase inventories! I took the course description of our field work with me and my own bookcase inventory, to show what we do and what I was interested to talk about. I brought a charged camera, tape recorder with extra batteries and extra tapes - all according to hints from Cook & Crangs. I also bought a semla! The interview could start!

Sten is 57 years old and lives in a house in West Stockholm, 5 rooms and a kitchen. He works as a consultant at an IT company. He bought his first Billy bookcase for more than 30 years ago and then bought some more in the 80's.

Why did you choose Billy and IKEA? It had to do with economy plus that we needed a convenient storage space for books, photos and boxes of various kinds. It was the main reason that it was Billy then. If we look at the Billy we have today, we went to IKEA specifically to buy a Billy. We have Billy bookcases in our TV/workroom and also some in our youngest daughters’ room.

Why did you buy Billy again? The advantage compared to other bookcases is that Billy have removable disks, you can self-adjust how you want to occupy the shelves, which is an advantage if you have different sizes of books and such. It was one of the reasons that it was Billy then. There was also a cost issue; you got a lot for the money.

Billy is described as very easy to build except that it is a bit unwieldy with many pieces. If you have some space and normal hands it is no problem to build Billy! Sten emphasizes that the problem is that you must tighten it frequently to keep stability and to ensure that the nails to the back cover (bakstycket) is not only nailed but also glued. On the first bookshelf all of the back cover had to be nailed. On the one we have now you pushed in the back cover in a padded running, which is much better. It was no special feeling when it was finished; it was just that the task was completed! We know before it would be good to use, that's why we bought the Billy, we looked at various options. Billy is a very timeless storage unit. So for us it works to buy another Billy, if we need it or buy a new one in another color!

We have three Billy bookcases in the tv/workroom and one in our youngest daughters’ room has front doors, so you can use the bookcase as a cabinet as well. So you can storage what you want in a Billy bookcase and fill it with books, photos, DVD and memories of all kind.

I don´t think we will buy any more bookcases, today you buy mostly pocketbooks which you doesn´t keep, you give them to a friend who has not read the book. Maybe you keep some books which you think is good. Sometimes you might read them again, and sometimes you do, even if it is not that often. I think the need for storage space for books are reduced more these days.

So in the bookcases there are, as you can see, books, memories and everything from family cards and holiday cards, which mostly lie in the boxes and albums. There are some cards from the kids and holiday cards that you can pick up. The most important task for Billy is to be an efficient storage of books and cards that you want to view. If you want to read the book that you think is fun, just take it, it is the most important task. Books that you just dust in a closet you can get rid of, I think!

I think we saves bounded books for a longer time, some books are inherited, and it happens that if I have nothing to read I pick out the old books. I have some literatures from the father and grandfather, Dan Anderson literature for example, which is fun to keep, but not so much that I could not get rid of them if I would need.

Does Billy fit with you as a person! No, I would not say that (laugh) it could be any bookshelf which is practical and cost effective. The functionality is the most important factor! Billy may draw the short straw when it does not fit in with color or form if you move or change at home. You can then send it to someone else who can use it and then buy something new.
If you should move would Billy follow with you then? Maybe, it depends on how it will look, if Billy fit and if we have the same need for storage or have been streamlined with the books and the other stuff, it is affected by all this in that case.

Billy does not fit all rooms. Billy fits badly with antique or “allmoge” oriented furniture. It should be at decent modern setting. Billy does not require anything for its own existence; it flows into the walls and does not take much space. You can have what you want in the Billy bookcase, even antique. But the environment in which Billy is in I imagine is relatively modern. Given that Billy is so cheap you can shape it to fit in, you can cut down a plane if necessary!
Posted by Björn at 1:07 PM