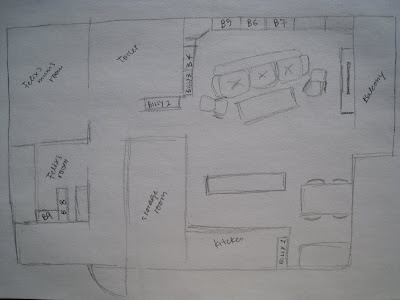 The floor plan of Felix's apartment.
"Billy pronouns like 'billig', which means cheap in Swedish." Anu Mai, Felix's mother.
Felix, twenty-seven years old, is a master student. He is fond of Chinese cultures. He studied in Beijing for two years few years ago and has been to Hong Kong as an exchange student for half a year. Felix lives with his mother, Anu Mai, who is teaching economics at Stockholm University. Felix has an elder brother, who is now married and moved to Göteborg. 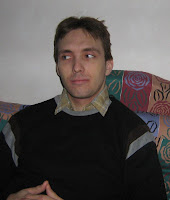 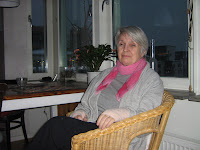 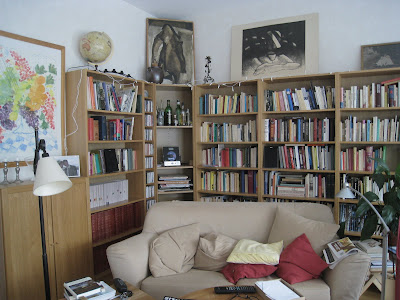 The first Billy – a White Full-sized Billy with an Add-on Shelf
The first Billy lies in the corner of the living room, hidden by the kitchen. On the bookshelf are there children story books which Felix and his brother used to read when they were small, craft works made by Felix’s brother. There are some cook books in the middle shelf, which is the most often use shelf. The lower shelves store old magazines and card games that they are not often played. 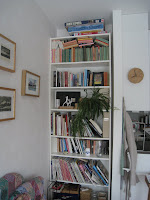 The Second Billy – a White Full-sized Billy with an Add-on Shelf
The second Billy is placed in the corridor, the first bookshelf that visitors see when they enter the house. This bookshelf is mainly used as a display shelf, with some craftworks made by the brothers, souvenirs and gifts. At the bottom shelf, there are some maps which they used in their travels. 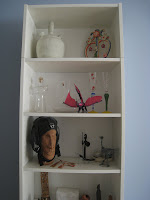 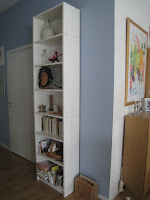 The Third Billy – a Brown Half-sized Billy with Doors
On the top of the shelf are there a wedding picture of Felix’s brother with his wife and some candle stands. Behind the doors are there some old fictions that belong to Anu Mai. Both Felix and Anu Mai rarely touch the books inside, dust has also accumulated on the shelves. 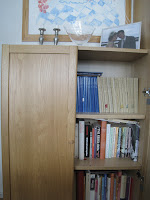 The Fourth Billy – a Brown Full-sized Billy
This bookshelf has more functional books on it: gardening books, dictionaries and language books. There are also some old bound books written in the 1950s. With these old, red bound books, the bookshelves in the living room look like a library. 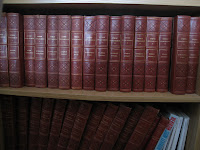 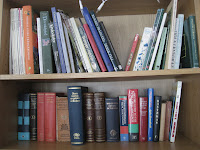 The Fifth, Sixth and Seventh Billy – Brown Full-sized Billy
These three Billy are placed together against the wall in the living room with mainly work-related books and journals on it. Almost all the books belong to Anu Mai and they are related to history and economics. Some of the journals and books are exchanged as gifts with other scholars in the same field. At the bottom shelves are there large-sized books. These books are placed not as neatly as the ones on the above shelves. Felix explained, “these books are not for display and they are blocked by the sofa.” There are no add-on shelves on these three Billy, they place some large paintings and a photo on it instead. These drawing are often given as gifts by Anu-Mai’s siblings, who are artists and hobby artists. The only photo there belonged to Anu-Mai’s mother, her childhood picture. 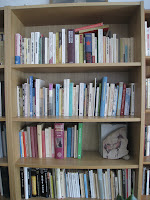 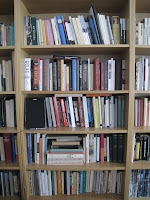 The Eighth and Ninth Billy – a White Full-sized Billy with Half-sized Doors
These two Billy are placed in a direction that creates a L shape in Felix’s room. Felix uses this L shape with the purpose to create a surrounded space around his desk, and this makes the sounds like a stereo system. The eighth Billy is put behind the desk with a reachable distance from the desk. There he places mostly academic books and some stationery. Both these two Billy have doors covering the lower shelves. Behind the doors of the eighth Billy are there some files, and fictions. Behind the back of this eighth Billy, Felix decorates with some textual arts that used to belong to his dad and newspaper cutting. 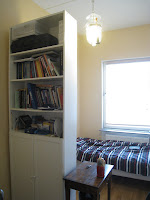 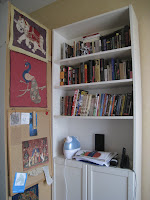 Felix explained, “These decorations are used to cover up the ugly back of the bookshelf so it is displayable.”
The ninth Billy is placed next to Felix’s bed. There you can find some fictions, comics and PC games. The lower shelves, which are covered by doors, contain the same items but are older and less frequently used.
Why Billy?

Anu Mai prefers the non-Billy bookshelves, the two in the right upper corner in the living room. She searched around vintage shops yet yielded nothing. She told me, “I like them more. They are light with good quality. I would prefer them if I found them, but they are no longer in production. The Billy is cheap, so we chose them.”
The White/ The Brown?
Anu Mai chose the brown Billies to fit with the other non-Billies, which are also brown in colors. The white ones were bought later since the white Billy is always available.
Posted by Christine at 4:24 PM

Email ThisBlogThis!Share to TwitterShare to FacebookShare to Pinterest
Labels: billy