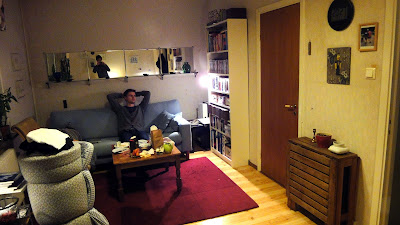 Hampus is my classmate. And also industrial design student.
He is 26 years old Swedish guy. Loves movies, music and tea.
The picture of his billy will tell more about this.

1.How long have you been having it?
For two and half years. Yeah, I think it’s two and half years. It was when we moved into our new flat in Umeå. It was when I was second year in Umeå.
2.Did you buy it?
Yes, we bought it together. We went to Ikea in Sundsvall. Cause that’s the closest Ikea from Umeå. It takes about three hours by car. We rent a car and we had a list that we needed. We actually bought two Billys. I think we only rented a with enough room in the back seat. We bought a lot of things including Billy.
3.Why did you buy Billy? Why this color?
We knew about the bookcase from before. I mean, Billy, it’s everywhere. I’ve had it home before, so it’s been around. And I know a lot of friend who have Billy. So we both know that it’s very inexpensive bookcase. And it’s worth. And it’s nice and it’s definitely good enough to good basic shelf. So we decided it quickly before we got the car, like “Two billys, and blah blah”
4.Why White?
I kind of wanted veneer. First I wanted oak veneer, cause I thought it’ll look good. But it was 200krona more expensive. So we decided not to do that. This is one of the cheapest ones. Basic price. It was 500kr. I don't like color. They should be filled with contents that matters. Not be expressing themselves.
5.Renting a car and going to Ikea is common thing in Sweden?
I think so. I think it’s student thing. Especially people who moved out from where they grew up. We’re so used to do it. Whenever we need some basic stuff for home, you go to Ikea because you know that you’ll pay so much more for everywhere else. If you’re not looking for anything in particular, you go to Ikea because you know that you’ll find it in good price, and that will be good quality.
6. How long do you think you’re going to use it?
Four or five years? Before it breaks. But again, what could break without being repaired? We could keep this until it breaks. Or starts to look crappy. Which I don’t know when it’ll happen. 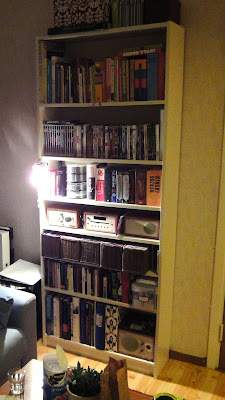 7.What do you normally put in your Billy?
60% -> I never use, but I want to have them as inspiration.
20% -> Sometimes using.
20% -> Using
It’s mostly entertainment stuff. Reading watching listening.
8.Can you talk about the things you have each shelf? 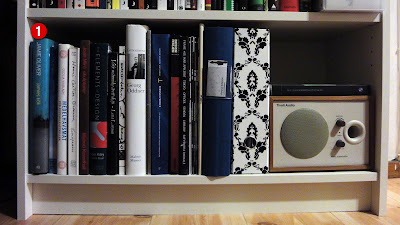 Bottom shelf [No.1 with red circle]-> Mainly arts or design books of large sizes. They are the heaviest so I keep them far down, because thats where the shelf can take the most weight 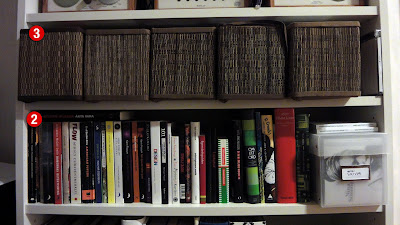 2nd shelf [No.2 with red circle]-> Pocket books. Mainly novels, some more like fact, fictions.
3rd shelf [No.3 with red circle]-> All my Cds. All the Music, cause on the shelf above, there’s just stereo. So I can just pull out these small drawers and look and that from top view. So that’s convineint. 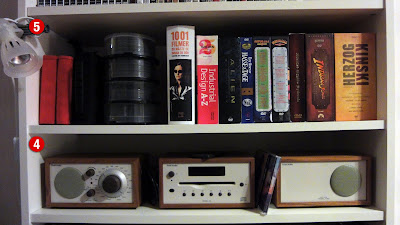 6th shelf [No.6 with red circle]-> Movies. Every movie I have are on the shelf. 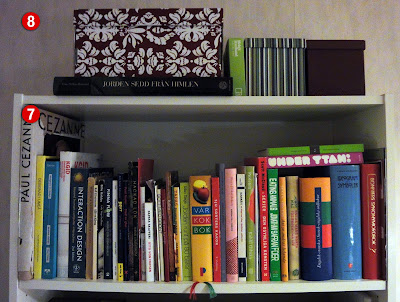 7th shelf [No.7 with red circle]-> Books. Random books but mostly fiction. Food, cookbooks. Dictionaries, facts. Different kinds of literature, interesting stuff.
Top [No.8 with red circle]: Two small boxes with electronic stuff. One big box with PC games. Photos of the earth, airial photos. It’s so heavy, so I had to put it there.
Attached to the shelf, there’s also small light. To light and to read books.
6.Is there any order or reason to classifying things?
It’s about functionality. What I use most often, I place them in center, and stuffs I use rarely, I place them on the top or on the bottom. So for instance, the CD collection, the stereo and Movies are in the middle. It’s also affected by the fact that one of the shelves is not movable. So I had to plan around that one. But Stereo should be below center so that it can be on the right level when you sit on sofa.
7. Why here? Beside the sofa and I also it’s hard to place in general. Cause I don’t have many walls without window, mirrors.
8. did you plan? I think I had some experience. I don’t buy new things that often. I had couple of years to figure out how I want to place. For instance, the CDs I had them in the box, not like DVDs. I don’t need to see them all the time. It had slowly evolved how bookshelf should be stuffed. I don’t want to change the order that often. I want find a best way and keep that way.
9.Do you like Billy? Now when I think of it, I’m afraid of it will break some part because of the weight of the books. The top shelf, for instance. You can see it’s heavy and it’s getting bent. Wood is a bit weak. But in general, I’m satisfied. Just as long as it’s not overloaded.
Posted by Jungha at 11:02 PM