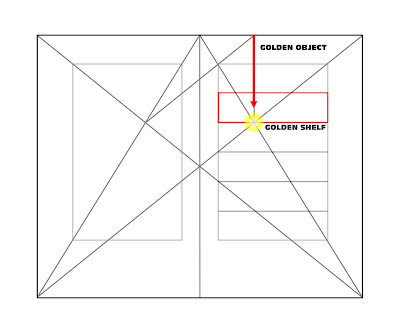 A correlation between the 4th shelf in IKEA’s Billy Bookshelf and the Golden Section used in art, architecture, and book design for centuries has been discovered. The researchers call their discovery the Golden Shelf.

Researchers from the Department of Social Anthropology at Stockholm University in Sweden in collaboration with Fulbright Research Fellow John D. Freyer from the School of Art and Art History at the University of Iowa in the United States, have made a unique discovery about the relationship between aesthetics and the shaping of individual identity. The discovery was made during a project about IKEA’s "BILLY” bookcase.

- After conducting an interview-based study we discovered that the 4th shelf in a full size 5-shelf “BILLY” bookcase is the one nearest eye-level position and where the vast majority display books, objects and photographs that most clearly illustrate their identity aspirations. We call the 4th shelf the Golden Shelf, say social anthropologist Johan Lindquist and visual artist John Freyer.

The research was conducted as part of an interdisciplinary course offered by the Department of Social Anthropology in collaboration with the Swedish design and architecture firm UGLYCUTE and the “Fieldwork in Sweden” course at Konstfack (University College of Arts and Crafts). Johan Lindquist and John D Freyer organized the course, which included presentations by leading researchers into material and visual culture, including Inge Daniels from Oxford University and Pauline Garvey from the National University of Ireland, Maynouth; and artist Christine Hill from the Bauhaus University, Weimar, Germany and award-winning Malmö-based artist Michael Johansson.

The participating students conducted ethnographic field work in Swedish homes, made field observations in the flagship IKEA store at Kungens Kurva and collectively produced sculptural objects from a collection of Billy Bookcases purchased as part of the class, generously funded by the Helge Ax:son Johnson Foundation.

The mysterious Golden Section is legendary. Art Historians have attributed the use of the Golden Section in the construction of the Pyramids in Egypt and the Parthenon in Greece. The discovery of the Golden Shelf in households in Stockholm adds to this tradition of thought and illuminates how identity aspiration and aesthetics come to intersect.