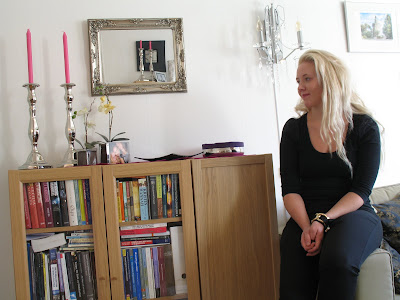 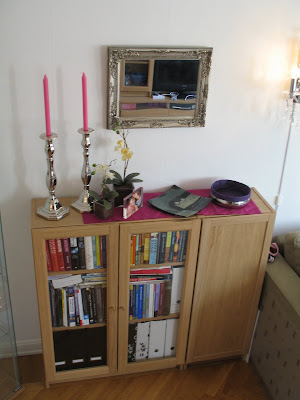 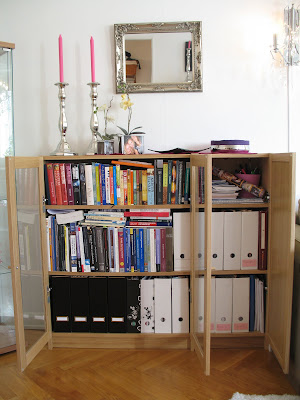 This Billy is located in an apartement in Kungsholmen, where my Norwegian friend Oda lives. This low-slung Billy has two, quite separate, uses. On top, it is decorative and presentational, while the interior more has the character of storage. The intention was for all three doors to be in glass, but since IKEA only had two glass doors at the time of purchase one became a solid one.


There are several things to be said for the decorative part. Both candles and candle holders contain many stories about Oda and her family: As for herself, the nuance of pink which colours the candles are a very special one, one which acts as one of several themes throughout Oda's apartment.

The candle holders are two out of four of Oda's, and out of eight in the family's possession. They are mean to be brought together for grand family occasions and milestones such as confirmations where they would be used together with lightly pink candles for girls and blue ones for boys.

The plate is sometimes used for fruit, while the bowl is mosly empty to reveal the fabric which changes with the seasons. White for summer, purple for winter and red for Christmas. 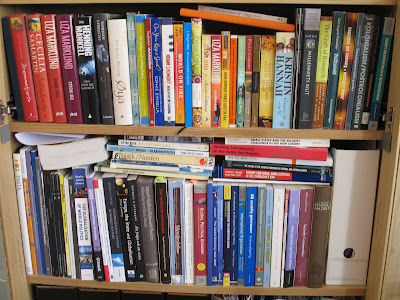 As have been already mentioned, the lower part of this Billy has the general character of storage and display, more specifically of books and various papers. The books are mostly sorted according to an upper/lower logic of a fiction/non-fiction function. But this is true only as a most general rule, most likely to a creeping invasion of non-fiction into the upper levels of the bookshelf. E.g. Noam Chomsky finds himself rubbing shoulders with "Can you Keep a Secret?", while a somewhat alien book can be spotted in the lower left: This is "Pasta", a collection of recepies which couldn't fit in its dedicated place in the kitchen.

Behind the Wooden Door: 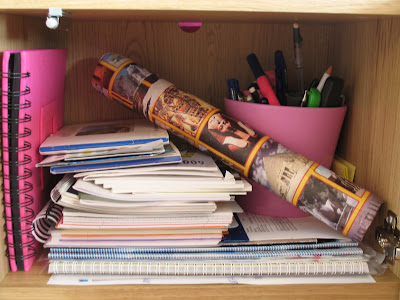 Besides a whole lot of papers, there are traces of the pink theme Oda has in her apartment. Both the notebook and the vase filled with pencils perpetuate Oda's passion for pink!

This concludes my findings on this particular Billy.
Posted by Per Björklund at 7:50 PM