It was really a new experience for me, because I never made an interview before. First of all I faced with a challenge to find a person who owns ‘Billy’. Lots of my friends have a furniture from IKEA, but not so many of them got ‘Billy’.(or probably they just don’t know if their bookcase is ‘Billy’ or not).After I found a particular interviewee I decided to prepare a checklist of questions which I was interested in and as it was advised in the article ‘Doing Ethnographies’. Now analyzing the process of my interview I can definitely say that I made the main mistake that was mentioned in the article – I got stuck to the questions that I prepared and it prevented me of building a fluent discussion. One more point -it was impossible to come to the place where my friends’ ‘Billy’ was, because it is his parents’ apartment and he wasn’t sure that it would be proper to come there. Our interview took place at one of the Konstfack seminar rooms.During interview I was trying to record and filming as well which made me feel even more nervous than my interviewee, but as it is said- skills come with the experience so here is my ‘first try’ interview.

ow?
-It is in my parent’s place now. In the storage. They rebuilt some rooms, so they don’t need it anymore. I had it in my room for many years.
-Do you remember when this Billy appeared in your apartment?
-Well I bought it by myself when I turned to be 14. I bought lots of CD records and I needed a place to store

them. Me and my mom build it- we usually did it together, cause my father hate the IKEA furniture and the ‘self-building’ process.
-But can I ask you probably a strange question. Because when I was trying to find a person for interview, more than a half of those who I asked didn’t know the name of their bookcase, although they bought it at IKEA. Why did you memorize that your particular bookcase is called ‘BILLY’?
- I don’t know. Probably because it was quiet popular among my friends. I think most of them had Billy… Like an icon.
- What was in your ‘Billy’? What did you store there 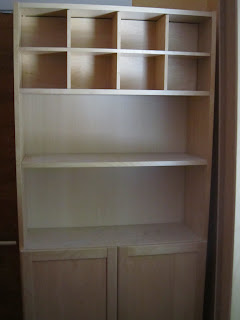 ?
- Well I bought this thing to divide the self that CDs’ would perfectly fit. And I also always had a lot of junk stuff in it. CD player- really big one. Homework and etc. Books and papers. Things that I made at art school. Just a store place in my room.
- Did you use this space for exhibiting your best works from art class or…?
-No. Just randomly selected pieces. In my parents place there are lots of my works! Ceramic you know…
-Which CDs were there? What kind of music?
-Well, when I was younger I was really into the heavy metal music. Only heavy metal. I was a big fan!
-What happened with Billy now?
- Well, when I moved, the apartment I rent was really furnished so I left it. And also it doesn’t fit the place I live now. Cause it quiet hard color. It is like this fake tree color, kind of yellow, fake pine tree or something. Because walls in my previous room were yellow so this color was the only which matched. Now we have another IKEA bookshelf in my new apartment.
-Can you say why you are buying this IKEA furniture stuff?
-cause it is good for its’ function, purpose. And it is cheap. When you are a student you can’t afford something more exclusive. And it’s really strict design, easy to match the apartment. And also it is a compromise in a way. Because I think IKEA is trying to copy some other more expensive design furniture, but at the same time it makes it more accessible.
We also discussed an idea of IKEA in general. And we found that it is quiet common for Swedish people, who are living abroad for a long period, to come to IKEA if they want to find 'feeling home' place. Alex told me about his friend, who lives in Shanghai. And during Christmas period he goes to IKEA every weekend to get this traditional Christmas food.
Posted by Dar.Makar at 4:01 PM

Email ThisBlogThis!Share to TwitterShare to FacebookShare to Pinterest
Labels: Interview