The Meaning of Billy 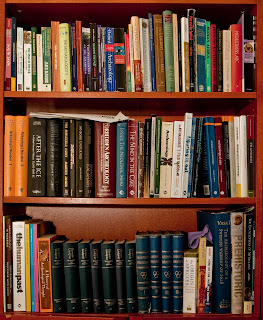 We bask in the sleepy afternoon sunlight of a late February day. The blåmes flit amongst the bare branches of the hedge that frames the snug patio and filter the gold and gossamer rays that illuminate the warm cherry veneer and faded leather covers of Anders’ personal library. Jasmine tea suffuses the air and the whole atmosphere speaks of spring as opposed to the lingering traces of an exceptional winter.
“Epistemology is one of the most important subjects anyone could know. I think it should be a mandatory part of any education. It would only take a single term to know everything there is to know about it, but I think it is necessary to understand epistemology to be good at any other discipline, regardless of its application.”
This is a well known argument of his; I have heard it many times.

“I completely agree.” I take a sip of tea and look out the window at the little birds’ activity. “I studied it some years ago and still find it useful.”
Though I had come to interview Anders about his bookcases we had readily slipped into our traditional avenues of discourse. The afternoon passed in its usual pleasant fashion; that warm haze most often found to enshroud happy memories. Later that night I sat and stared to the images of his Billy bookcases and wondered what was really there. It was easy to count the books (I counted 595 that were visible, I did not count the books hidden behind the doors), to note the way they were organized (by subject) and the knick-knacks (or dust collectors as he called them) at the top of the shelves. Even the bookcases themselves were unassuming; standard Billy’s in cherry stained beach veneer. This colour was popular about ten years ago, a “fashion” colour. It strikes me as odd that he would have bought a “fashion” anything; it is not his nature to acknowledge let alone participate in trends. Maybe the deep rich colour appealed to his luxurious side at the time. 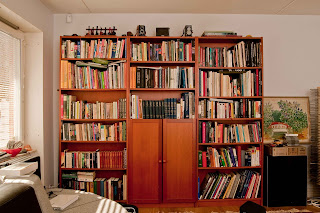 These are “true” Billy bookcases; full height, no doors, no lights, just books. Nothing but books. Anders stressed the fact that bookcases are only for books. He has a certain amount of distain for bookshelves with only a few books, smothered beneath ornaments, possibly the television.
“Bookcases are for books. It is their only real function. You cannot get into a bookcase; well you could if you took out all of the shelves, not the middle one, that is structural. Then you could lie in it if you were not too tall.”
Bookcases, Billy or otherwise, are not just storage for our bits and bobs.
“They are for display. No matter what you put in them, whether they have doors or none, bookshelves are for display.”
What do we display in our bookshelves and for whose benefit? Thinking back on the sleepy afternoon, with the sunlight streaming in through the bank of windows a thought occurs to me. Sitting as I was, facing him with the bookcases in the background, his Billy’s formed a shadow; a physical manifestation of his personality was cast upon the wall behind him. Within those six hundred odd tombs was the history of his fifty-two years of life: his dreams, experiences and his stories.
Stories are interesting things. I say “things” because stories have a physicality that goes beyond the temporal nature of the telling. Stories stay with you. Thomas King, a professor of English at the University of Guelph, said
[t]ake [this] story, for instance. It’s yours. Do with it what you will. Tell it to friends. Turn it into a television movie. Forget it. But don’t say in the years to come that you would have lived your life differently if only you had heard this story.
You’ve heard it now. (Thomas King, The Truth About Stories: A Native Narrative, 2003)
We tell stories to give our lives meaning; to make sense of it all. In addition, we are affected by the stories we hear. Stories can change you life.
“Material objects mean nothing; it is all about the story.”

The pipes on top of the left most bookshelf allow him to talk about the training he did when he was a competitive cyclist, the short pipe clenched between his teeth as he worked out. Sahara Overland: A Route and Planning Guide by Chris Scott is an open invitation to talk about his beloved Land Rover, which he sold about ten years ago, and still mourns. Talk of Land Rovers turns to his interest in everything English which leads to archaeology, his yearly trip to Gotland to excavate and other adventures which have begun or ended on that island.

“Sometimes I would like to go back to school for archaeology, but who would hire me at my age?”
The three open shelves in the central bookcase are entirely archaeology and history that has archaeological importance. Hopes and dreams crystallize here and are on display for others to contemplate. What does viewing the dreams of others mean to the observer? Do we automatically think “I always wanted to do that” or do we look on impassively? I know that I share his dream. How does my desire affect and interact with his in this context? What kind of space does the bookcase create for moments and feelings like these?

There is a whole shelf dedicated to books on travel, mostly to countries he has visited at one point or another in his life. Every book has a story, not necessarily about the country on the cover, maybe about an old girlfriend or an acquaintance from another place and time.
“My first girlfriend was from Ethiopia. I would like to visit there someday.”
This story connects to other objects found around the room. Two bronze Ethiopian crosses, the walking stick of an Ethiopian priest, numerous religious paintings and an urn which used to hold holy water. As a staunch atheist these religious objects create a tension and, therefore, can be used to generate conversation. Among his books on science on will find almost every book by Richard Dawkins, books by Bryan Sykes and Darwin touting Anders’ “religion is nonsense” position. He is particularly please with his copy of The Origin of Species, “It almost looks like it could be a Bible”.

Though spatially very distant, the “travel” and “language” shelves can be connected in much the same way.
“I was reading Amharic and listening to Japanese. I would not recommend it, very confusing” he finished with a smile and a laugh.
An erudite, Anders is generally self taught in a wide variety of subjects. This has lead to many of his friends claiming that he knows everything. Though this is far from the truth, it is very impressive to sit and have a conversation with him. If one were to just look at the number of language books he possesses, you could almost surmise that he can speak no less than ten languages! Bookcases are performance pieces. His books tell this story as well.
What do I mean when I say that bookcases are performance pieces? To take a page from Victor Turner,
If man is a sapient animal, a toolmaking animal, a self-making animal, a symbol-using animal, he is, no less, a performing animal, Homo performans, not in the sense, perhaps that a circus animal may be a performing animal, but in the sense that a man is a self-performing animal--his performances are, in a way, reflexive, in performing he reveals himself to himself.
This can be in two ways: the actor may come to know himself better through acting or enactment; or one set of human beings may come to know themselves better through observing and/or participating in performances generated and presented by another set of human beings. (Victor Turner The Anthropology of Performance 1986: 81)
As humans we seem to have a need to collect “things”, be they knick-knacks, pictures or stories and we tend to surround ourselves with them. Our homes become depositories for a vast array of items, each possessing some intimate detail that makes them a necessary part of our lives. Even functional items, such as a fridge, for example, are purchased with a certain amount of personal investment. You bought the white one because it goes with your colour scheme or stainless steel because you love the way it looks. When these items are amassed in our homes they become props for identity creation and confirmation. We use these “things” as starting points for narratives we tell about ourselves. It is a performance for ourselves and for others which we keep on exhibit in our homes.
I think back to my personal library in Toronto. The room is very much staged; each item in a place that makes sense in relation to the other objects in the room. There are not less than four bookshelves in addition to three wall mounted shelves and several stacks of books on, and in the tables. Nearly every book I own is on display. Scattered throughout are objects that have found their way home with me from the various countries I have visited: a pewter owl from Portugal, fragile glass vases from England and a collection of fossils from around the world to name a few. What do these items say about me? Or, perhaps more importantly, what do I want them to say about me?
“As I said, it is all about display.”
You will find books by Noam Chomsky next to texts by Stephen Hawking and Ian Hodder. These are incredibly dense texts, easily able to impress even the most prideful of guests.
“These three shelves are fiction,” he said with a dismissive flick of the wrist “You should put your anthropology texts here. That way, when some sits at this end of the couch, they will be impressed by the titles they can see.”
He is not a big fan of fiction.
“I do not get a whole lot of time to read. I figure I should use it for science, something I would go back to. Fiction you read once and then give away.”
He is currently a cabbie working twelve hour night shifts. He is lucky to read at all right now. The exceptions are his books on photography. The top two shelves on the right most bookshelf are reserved for these well-worn works. He can find the most important dozen or so books without even looking at the shelf. The three cameras on top of the middle bookcase chronicle his thirty-five year love affair with photography. These are books he takes down and reads almost daily.

What of Billy? Does the Billy bookcases hold any special meaning for Anders?

“Billy is iconic. They are so simple and functional that you really cannot hate them. You can hate IKEA, definitely, but you cannot hate Billy. They are so simple that they cannot even be ugly.”
Unfortunately, he cannot buy more bookcases in this colour; it is no longer in fashion.
“I have been thinking of just running shelves wall to wall in here. That way I can put all of my books up and it will take care of the awkward spaces currently left around the bookcases. However, I hate empty shelves. Every shelf should be full off books, to the point that it looks like you have more books than space. That is more impressive.” 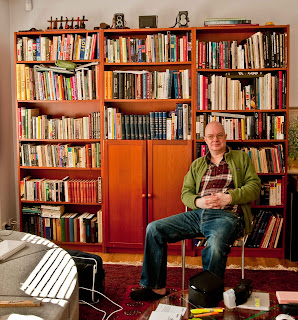