Together with Jungha, I took the IKEA bus that was quite full (considering that it was Thursday around lunch hours). The bus was wrapped in IKEA colors (dark blue and yellow) not only on the outside but also inside - with blue head rests and yellow handles. 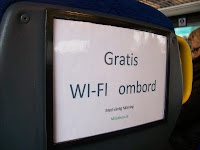 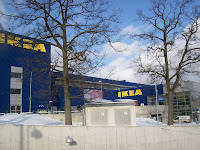 The ride took about 30 minutes.We noticed the building (that serves as a giant sign) straight away despite some trees. The bus dropped us off right at the entrance, where we could also see the departure times for going back to the city. 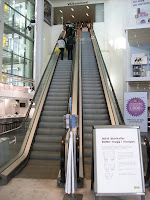 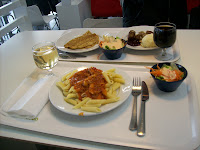 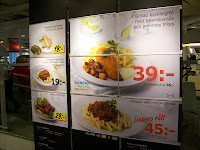 ed it would be smart to eat before we follow- what I had remembered as a long and tiring walk though the snow rooms. The giant escalator took us upstairs, where we had to turn around from the pointing arrows in order to get directly to the restaurant. The meals were very cheap and the food tasted better than I expected. 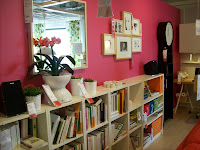 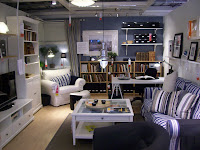 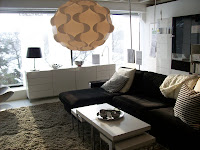 Then we decided to follow the arrows and went from the top floor down as the path suggested, detouring only for middle sections but then returning back on the marked track. Despite the arrows we had to correct our direction a few times. We saw Billy in one of the showrooms, but it was not the right "member of the family". It was positioned into a fully furnished room, that could be mistaken for a real living space, if it wasn't for the price tags. Many signs showed how much would the full room cost- implying that you can buy the whole set or scene if you want without your personal efford of decorating. But what was it that makes the show rooms so home like? Small items that were lying around rooms randomly as if somebody would just use them, not perfectly even rugs, messy bed sheets, drawings are put on the walls as if they are real accomplishments of children, hats on hangers etc. I think the visitors and buyers contribute to this image.Though-out the store they are sitting in chairs, lying on beds, opening the drawers, trying out the furniture and filling up the empty rooms. 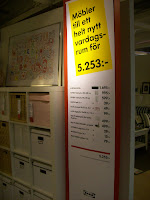 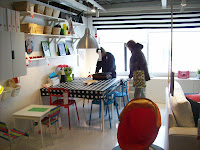 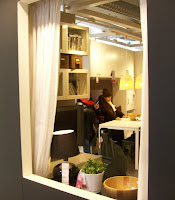 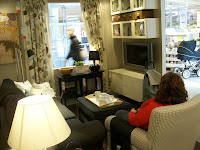 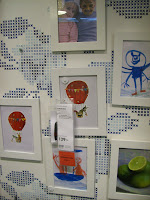 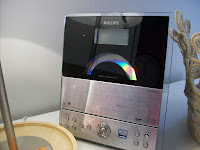 I was surprised to found out that the books on the shelves were real books (although many titles were repeated). The consistency is not the same through out the whole IKEA, though. They are some shelves with fake books and fake (empty) DVD's, some fake laptops and TV's, but also some real ones (the brands I found were Phillips, Thompson and JVC).

In the section where we expected to find Billy we started to look more closely at the names of the items and prices. We didn't find it (I wonder how many people go to IKEA with the exact knowledge of what they want to buy and for what price?) - and asked IKEA employee to help us. Billy was just 5 meters away and as it was still possible, we booked the discounted blue Billy. The lady assured us that our Billy is now booked, so to say ours and that we can take as many time as needed in the store. "You don't have to rush down now." 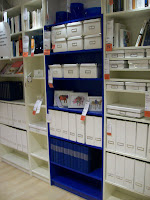 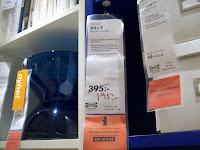 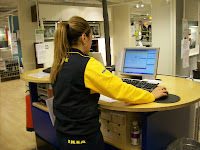 We navigated down to the ware-house (almost the opposite of show rooms in terms of color and feeling) and picked cheap (9kr) color pencils on our way as the "open your wallet item". The queue before the cashier was quite long. After paying we had to go to the basement to pick up our booked Billy. As we soon found out, it was much heavier than we expected and very unfriendly to carry (we didn't have any wheels). We took it to the bus, then T-bana, another bus and many elevators in between. Because of its height we kept bumping it into T-bana ceiling and elevator doors that were lower. If I would have been alone, I couldn't carry Billy by myself. (The next day, we opened the flatpack and put all of the smaller pieces into the backpack, while Jungha was carrying the longer pieces. Half way through the way to Uglycute studio the bottom got loose because it was wet from snow and all of the pieces he was carrying fell out. For the last part we carried the package separately. I think we both feel relieved when Billy reached his final(?) destination. 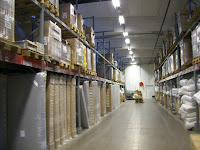